I work from home.  And when I say I work from home, what I mean is that I rarely leave home.  I venture out sometimes so I can get some fresh air and be around people who aren’t 6 years old, but those times are few and quite far between.

However, there are several reasons a person should get out every once and work somewhere besides their home office.  I’m not going to list the top 5 reasons you need to get out (maybe I’ll tuck that feather in my cap for another day), but I am going to tell you a story about something that has happened to me as a result of just getting out of the house a few times.  Although I will give the disclaimer that I had to do more than just get out.

It all starts with one of the times I ventured out to be among the living.  This story started probably 6 months ago.  I went to my favorite coffee shop (where everything costs about “Six Bucks”) to just have a change of scenery.

I was sitting at a long table, and there were several others sitting at the table near me.  It was evident that they knew each other and saw each other often.  At some point in their conversation, something they were talking about caught my attention and I began interacting with them.

Before too long, we were introducing ourselves and learning a bit about each other.  One of the men was named Tom and he was a very kind and personable man.  We talked for a few minutes, and then I went back to my work.

The next time I ventured out to the coffee shop, I saw Tom again, and we exchanged friendly hellos.  He asked how I was doing and how my web design business was going.  Said he hadn’t seen me in a while and asked where I had been.  It was friendly, but not intrusive.  Not as if we knew each other, just as if we knew of each other.

Well, that situation happened about every single time I came to the coffee shop.  I don’t think there has been a time that I’ve been here since that time 6 months ago when I didn’t see Tom.  And we always exchanged our hellos and how are you’s.  He constantly asked if I was still doing web design and wondering how my business was doing.

He said several times that he may know a few people who might need a website and that he would pass along my name if it came up in any conversation he was having.  I always thanked him for that.  It’s so nice to be told that you’ll be recommended, even though I was pretty sure he didn’t know what kind of web designer I was.

The day after our last encounter at the coffee shop, I got an email that shocked me.  At first, I thought it was spam.  I was sure of it.  The subject line was “YOU ARE THE BOMB!!”  Just like that.  I mean……really……who gets emails like that?  I hesitated to open it because I was sure it was junk.  But when you see a subject line like that, it begs to be opened.

It was a short email, but one that made my day.  Perhaps my weekend.  Hell, it pretty much made my year.  Here’s what it said:

“What a great web site. Will tell my friends for sure. Proud to say I know you.   Starbucks Tom”

What an email, huh?  Never have so few words left me feeling so fulfilled and amazing!  I wrote him back and told him that I was so flattered that he had gone to my site and liked what he saw.  Told him that I hoped I would see him again really soon.

Well, I saw him again this morning.  He told me that he feels like he really knows me now.  Said he’s spent some time on my site and read “all about me.”  He said that he’s been sending my name to everyone he knows and encouraging them to check me out!  He also told me that he now considers me a friend and then said that if I ever need anything done, he knows lots of people who can work on or fix anything.  (!!!  Big deal for this newly single gal!)

All this time, we’ve just been cordial.  He didn’t consider me a friend, and I only considered him an acquaintance…..someone I see on those rare occasions when I venture out of my home office and into the graces of others.  How much sooner would our relationship have developed had I ventured out a bit more often?

Who else sits in the coffee shop so many times when I’m there?  How could my life be further enriched by someone who sits so near to me?  I think we tend to forget how much influence each person we come into contact with can have on us.  That is, if we’re open to it.  Open to saying hello to people you’ve never seen before.  Being willing to see each new person as someone who can add richness to your life.

So, get out there.  But don’t just physically “get out there.”  Put yourself out there.  When you do get out, don’t sit with your face buried in your computer screen, earbuds in your ears so as not to be disturbed.  Greet people.  Be the first to say hi.  Offer a friendly smile to everyone you encounter.  Ask someone how their day is going so far.

I like to think of these kind of interactions as low risk, high reward.  That’s how I have been living my life for the last year and a half or so and my life has never been richer.  The more I open myself up to being truly transparent and vulnerable with people, having the expectation that I’m going to meet great people, the more great people I meet.  The fuller and sweeter my life is because of those new friendships.

Starbucks Tom has taught me that you never really know who’s sitting right next to you unless you take the effort to find out. 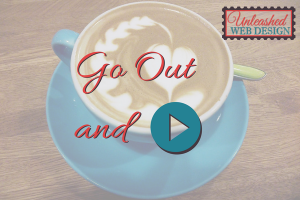 Have you ever met someone on one of your outings who had a big impact on you in some way?  Have you ever gone out of your way to try to put a smile on a stranger’s face?  I’d love to hear about how you put yourself out there.  Leave a comment below and tell me all about it!